Back to What’s New 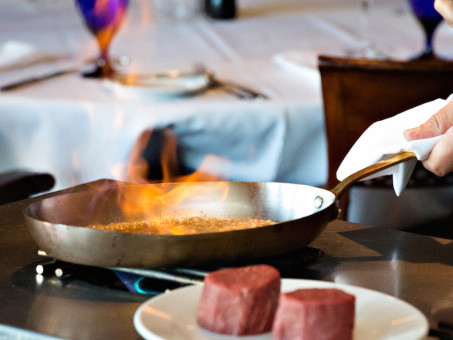 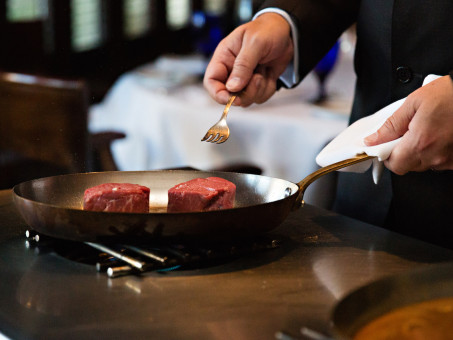 Bringing back the traditional elegance of fine-dining, Seagar’s Prime Steaks & Seafood ensures each diner’s experience is distinctive from the next. One way this is held true is through the tableside preparations of exclusive Seagar’s menu items — including the Caesar Salad for Two, Steak Diane, and Bananas Foster. From preparation to completion, the process of tableside service is a sight to be treasured.

Steak Diane dates back to the beginning of the 1900’s and has since evolved from using venison to using beef filets. The name “Diane” comes from the Roman goddess of the hunt and was used for a multitude of game-related foods. In its origins “Venison Steak Diane” had to be pounded thin and cooked for an extended period of time in order to remove most of the gamey-flavor. It would then be flamed in a cream and cognac fortified pan sauce and served. Over time “Venison Steak Diane” matured into “Steak Diane” featuring beefsteaks and became a popular and often common choice in steakhouses.

At Seagar’s steakhouse the preparation process has been fine-tuned and the tableside presentation has become an experience in itself. It begins with two 5-ounce filet medallions cooked in a copper skillet with butter. After removing the seared medallions the server then sautees the shallots, adds dijon mustard, mushrooms and then flambés with brandy. The brandy de-glazes the pan adding an extra layer of flavor. The server then adds in a heavy cream and veal jus and the sauce is complete. The medallions are placed back in the pan for additional heat and served with the sauce on top, and fresh cracked black pepper.

Caesar Salad: A Staple of the Seagar’s Menu

Legend has it that this classic — and well-known — salad was created in 1924 by Caesar Cardini at his restaurant in Tijuana, Mexico. When Cardini was short on ingredients, he threw together some items he had on hand and voila, the Caesar Salad was born. At Seagar’s steakhouse, tableside Caesar Salad is a beloved dish and a tribute to the diner’s experience. To bring this dish to life, your table captain will combine 13 ingredients into a wooden bowl. Starting with the dressing, your captain will whisk, mix, squeeze toss and serve without ever leaving your tableside.

Bananas Foster originated in New Orleans, Louisiana, which was a major port of entry for bananas being shipped from South America in the 1950s. To take advantage of this readily available ingredient, Chef Paul Blange of Brennan’s Restaurant used bananas to create a new dessert — Bananas Foster. Today, Bananas Foster is a very popular dessert option on the Seagar’s menu. To make this delicious dessert, your table captain combines ingredients for the dish in a flambé pan. Once melted, bananas and banana liquor are added and the bananas are browned. Finally — a hit among guests at every table — the table captain ignites the rum creating a light show the whole table will love. Don’t like bananas? You also have the option to order this dessert with peaches or cherries, which we call Peaches Foster or Cherries Jubilee.

The Seagar’s menu has a few select items that are prepared and served tableside, each with its own distinct routine and service. Whether watching your server toss leafy greens in a homemade Caesar dressing or witnessing bananas fosters sizzle in 151 rum you are sure to leave in awe. Visit Seagar’s for a Sandestin fine-dining experience like no other.